Dr Martin Crampin will deliver a lecture to the Honourable Society of the Cymmrodorion on the imaging of the Welsh Saints by the Swansea-stained glass firm, Celtic Studios on January 18 at 6.30pm. 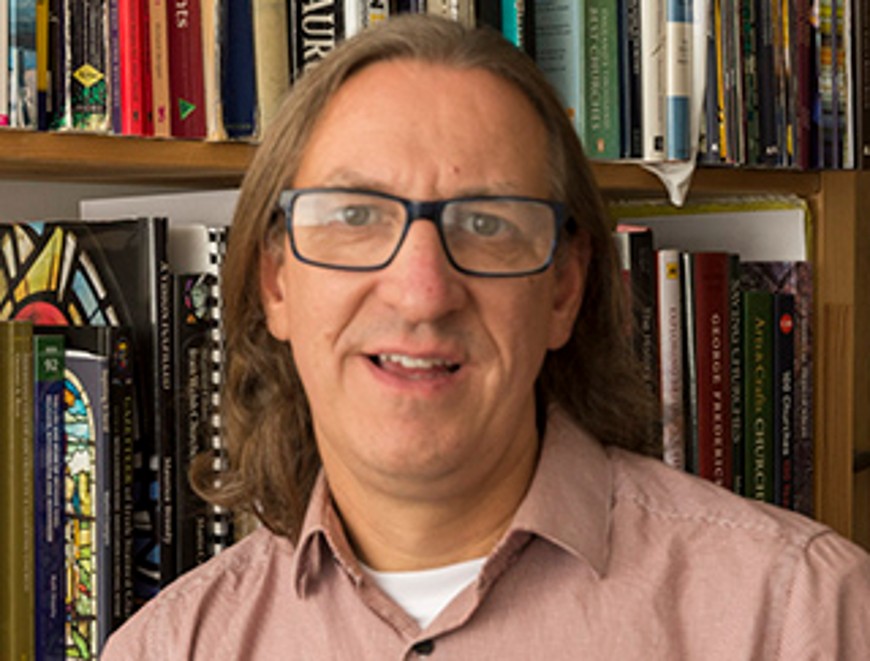 Dr Crampin’s lecture ‘Welsh Saints in Stained Glass by Celtic Studios’ will take place online. He has been researching the imagery of saints in Wales for nearly twenty years and the lecture will focus on the windows depicting Welsh saints made by Celtic Studios during the second half of the twentieth century.

The Swansea stained glass studio, Celtic Studios, was set up in the 1940s by cousins Howard Martin and Hubert Thomas and it was the first major studio in Wales to make stained glass. Howard Martin was also Head of Architectural Stained Glass and Vice-Principal of Swansea College of Art, and he laid the foundations for the successful development of the field of stained glass in Swansea.

Dr Crampin is a Research Fellow at the Centre for Advanced Welsh and Celtic Studies. Having worked with Peter Lord on the ‘Wales’s project, he is one of the small number of specialists familiar with the long history of visual art in Wales and has since worked on a series of research projects at Lampeter and the Centre.

His own research has focused mainly on art in churches, as well as the field of medievalism in visual culture, and he has been recognized as the leading expert on stained glass in Wales. Following the publication of Stained Glass from Welsh Churches in 2014, Dr Crampin has developed an international reputation as one of the few specialists in nineteenth- and twentieth-century British stained glass.

Dr Crampin also works independently as a photographer and designer and has deployed these skills in the research projects that he has been involved in at the Centre, as well as the many books that he has designed and written. Most recently this included the Cult of Saints in Wales and the Visualizing the Saints of Wales AHRC projects, and he is currently in the process of designing his Welsh Saints from Welsh Churches for publication in 2022.

He said: “In the late 1990s the late Maurice Broady gave a lecture for the Honourable Society of the Cymmrodorion on the work of Celtic Studios and others who practiced in the art of stained glass after studying at Swansea. His pioneering work on the firm was published as a book in 2010, shortly after he died, and I was asked to design the book and provide additional photography. By that time I had become well-acquainted with the work of Celtic Studios, and I hope that this exploration of their work – at its intersection with the imagery of saints in Wales – will build on the work of Maurice Broady and inspire others to look again at Celtic Studios’ windows in churches across Wales and beyond.”

As a practising artist, he has exhibited across Wales and internationally. His art practice is primarily concerned with the recording and reinvention of medieval decorative arts, and this was explored in his practice-based PhD (2011–15).

The event will be Chaired by Dr Elizabeth Siberry OBE, Member of the Council of the Cymmrodorion.

A warm welcome to all. The lecture is free, and there is no need to register.

Follow the link for details on how to join: Welsh Saints in Stained Glass by Celtic Studios - ONLINE ONLY - The Honourable Society of Cymmrodorion

To find out more about the Centre for Advanced Welsh and Celtic Studies go to www.wales.ac.uk/cawcs

To find out more about the Dictionary of the Welsh Language go to www.geiriadur.ac.uk