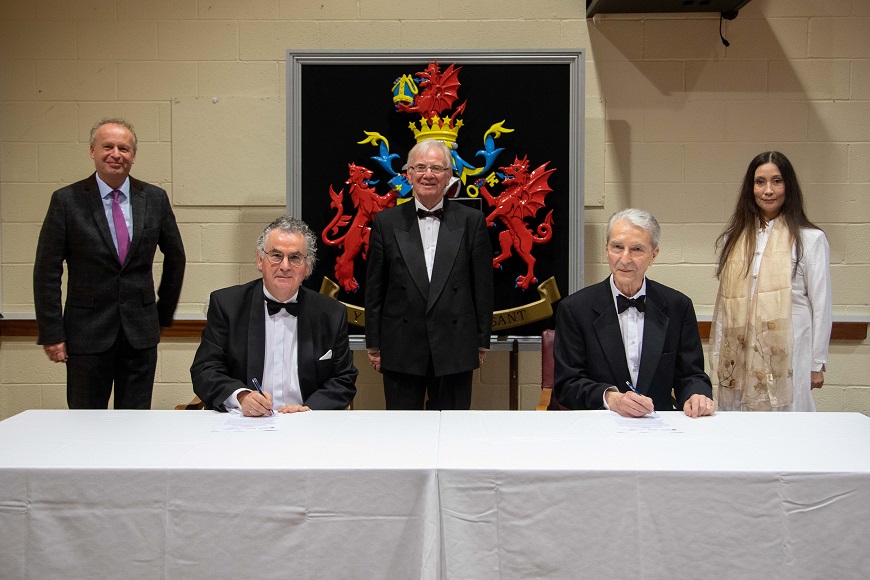 The Institute will be dedicated to the promotion of collective healing, social justice and conflict resolution. The partnership between both organisations was announced by Professor Medwin Hughes, DL, UWTSD’s Vice-Chancellor and Mr Sharif I. Horthy, Chairman of GHFP Board of Trustees during the University’s Founders‘ Day celebrations held at its Lampeter campus on the 18 November.

During the evening Dr Scherto Gill, was named as the Institute’s Founding Director.  Dr Gill is a Senior Fellow at GHFP, an international research institute based in Brighton. She directs the UNESCO/GHFP partnership initiative on Collective Healing and chairs the G20 Interfaith Forum’s Education Working Group. Dr Gill delivered the Founders’ Day lecture, Peace: The Imperative of Global Humanity, which focused on challenging the dominant conception of peace as an absence of violence, advancing a positive understanding of peace as being well, living well and becoming well. The lecture also explored how global humanity must embrace an ethic of love to engage in our diversity as a pathway to collective flourishing in harmony with the thriving of other beings on the planet.

In welcoming Mr Horthy and Dr Gill to the University, Professor Medwin Hughes said: “I’m delighted that we are launching the Global Humanity for Peace Institute here in Lampeter and to do this on our Founders’ Day.  Two hundred years ago, Bishop Thomas Burgess established a college in Lampeter that instilled in its students a deep understanding and respect for the Humanities - the study of human impact on the world. Lampeter has developed an international reputation for multi-cultural and inter-faith dialogue where harmony, spirituality, respect for others and the environment is valued and promoted.”

Through the Global Humanity for Peace Institute, GHFP and UWTSD will work together to further the aims and core objectives of UNESCO and will explore opportunities to collaborate with UNESCO activities and projects in the areas of Social and Human Science.

Mr Sharif Horthy, Chair of Guerrand Hermes Foundation for Peace noted: ‘We are so pleased to be here in Lampeter signing a Letter of intent with UWTSD, and in the near future a partnership agreement, to jointly establish a new Global Humanity for Peace Institute. The new Institute will work towards building peace across the world through inspiring and empowering a new generation of young people and providing for them the necessary skills and understanding’.

Tabue Nguma of UNESCO said:’ “I am so pleased I was able to make the journey from Paris to be here tonight at this special event, to witness the beginnings of such an important partnership between the University of Wales and the Guerrand Hermes Foundation. Together I am sure we can do important work to address social injustice, systemic racism and intolerance across the world.’

University of Wales Trinity Saint David is part of the UWTSD Group, a confederation of several institutions, which includes the University of Wales, as well as Coleg Sir Gâr and Coleg Ceredigion as constituent colleges. The Group offers a continuum from further to higher education for the benefit of learners, employers and communities.

UWTSD’s vision is to be a University with a commitment to the well-being and heritage of the nation at the heart of all its activities. Central to the vision is the promotion and embedding of a dual-sector educational system which educates learners of all ages and backgrounds, and stimulates economic development in the region, across Wales and beyond.

The University’s was founded in 1822 and will celebrate its bicentenary in 2022. It enjoys the accolade of being the birthplace of higher education in Wales.  The University’s 1828 Royal Charter is the oldest of any university in Wales. The University’s campuses are located in Swansea Carmarthen, Lampeter, Cardiff, London and Birmingham.

UWTSD is committed to placing students at the centre of its mission by providing a relevant and inspiring bilingual curriculum, providing a supportive learning environment, investing in its campuses and facilities, and ensuring that students, from all backgrounds, are given the opportunity to achieve their potential.

The Guerrand-Hermès Foundation for Peace (GHFP) Research Institute was founded in 1995 by co-founders Simon Xavier Guerrand-Hermès, a board member of Hermès International, and Sharif Istvan Horthy, the grandson of Admiral Horthy (Regent of Hungary 1920-1944). The founders believe that to effect enduring positive change and transformation in the world, the individual ought to start from a deeper connection with his/her inner life and spirituality. This principle guides the GHFP’s Trustees’ decisions in terms of the focus of our work and how to approach it.