A former University of Wales Trinity Saint David student has opened a new office for his company at Canolfan S4C Yr Egin. 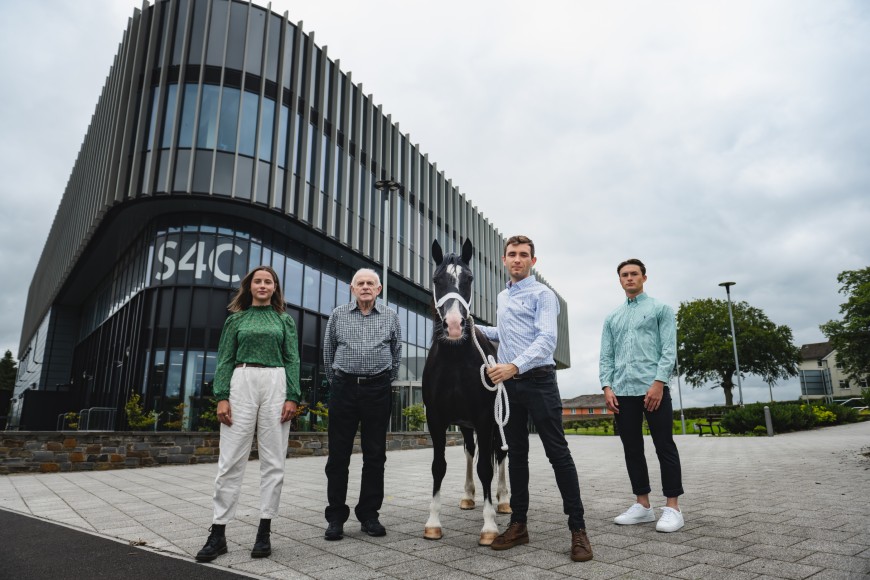 The young producer, Euros Llŷr Morgan, aged 24, who owns the Carlam production company, decided to move to Canolfan S4C Yr Egin based at UWTSD’s Carmarthen campus in order to be part of a community that inspires creativity and imagination.

Euros said, “As Carlam grew and developed, I was aware that having an office at Yr Egin would open doors for me. Since moving here I have managed to create a number of new contacts that have also brought additional employment opportunities. Yr Egin is a location that enables me to develop, and to learn something new every day. I am extremely grateful to the University, to Canolfan S4C Yr Egin and to all those who have helped me to accomplish this, from the companies to the individuals – particularly Amanda Harries, Artie Thomas and Rowena Griffin. Without them it would not have been possible for Carlam to grow to where it is today.”

Euros’ association with UWTSD dates back to 2015 when he was studying the Welsh medium performance course, BA Perfformio. The course developed his confidence and provided contacts with people from the industry.

“The BA Perfformio course was the perfect opportunity for me to realise my dream of working in the media. During my final year, I produced a documentary for my personal project about horse vets, that combined elements from the Film, Television and Voiceover modules of the course. On completion of the project, I was encouraged to pitch the idea to the BBC, and I was fortunate enough to win my first commission. The series ‘Only Foals and Horses’ has now been sold to channels worldwide. I am indebted to the course for enabling me to do this, and for encouraging me to start my company, Carlam."

Euros’ aspiration for a career in the media began in 2012 whilst working as a runner in the horse ring for S4C’s Royal Welsh Show programmes, and he is passionate about providing experiences for young people to develop and gain experience through Carlam.  Since Carlam opened an office at Yr Egin, a number of young staff from West Wales have joined the team to assist Euros with research, shooting and editing work.

Much of Carlam’s success has emanated from Euros’ background in breeding Welsh Ponies and Cobs, for example 'The City of Horses' – an enthralling programme that recently appeared on the BBC One Network following the unique horse keeping characters of the Swansea Valley. Also not forgetting the artistic production about the creation process of the unique Welsh cob sculpture at the Showground at Llanelwedd, 'Siwrne'r Bedol', and the harrowing programme for S4C following an undertaker during lockdown, 'Drych: Galar yn y Cwm' .

Over the last three months, Euros has been extremely busy producing and preparing material in conjunction with Yr Egin for the new local television platform ‘Shwmae Sir Gâr' which can be found on social media.

From setting up his own business and producing successful commissions, to hiring an office and employing staff, what Euros has achieved in a short period of time since graduating shows enthusiasm, enterprise and a strong desire to succeed in the media world, all by staying in South West Wales.

“Carlam is not just Euros now, but a team of absolutely amazing people, and I look forward to seeing the Carlam family develop and grow over the next few months.

“The aim in establishing Yr Egin was to collocate creative and digital companies and it is a great pleasure to welcome another company to join the community that is already here. I am certain that Carlam will add to the buzz at the centre and it is good to see a production company succeeding and venturing during these challenging times. Euros has had great successes in the 3 short years since establishing Carlam and I am very much looking forward to seeing how the company develops for the future”.